“But this is no time to dredge up vague premonitions. Savage, bestial city destroyers with no conscience are hard at work gutting, sacking, murdering the population, burning archives and libraries, demolishing museums and houses of worship.”

Comparing Bosnia to Glasgow is probably going to confuse and possibly upset some people, especially Glaswegians. But the inspiration for my project – The Glasgow Renaissance, with its doomed high rise flats, empty homes and desolation take me back  to 1996; to the ethnically cleansed and destroyed towns of Croatia, and the jaw dropping citywide destruction of Sarajevo.

The connection between the two places is of course, far-fetched. People in Bosnia and Croatia had their homes destroyed, or had to flee them for very different reasons than the Glaswegians I have documented, and it is impossible to downplay or be-little the savagery that swept across the region. After the war, much of Bosnia’s landscape was ruined and empty and that’s when my journey began – and the comparisons began to emerge. Placing photographs of destroyed, empty landscapes of Glasgow side by side with those from Bosnia, with no captions and you may find it difficult to choose which is which. 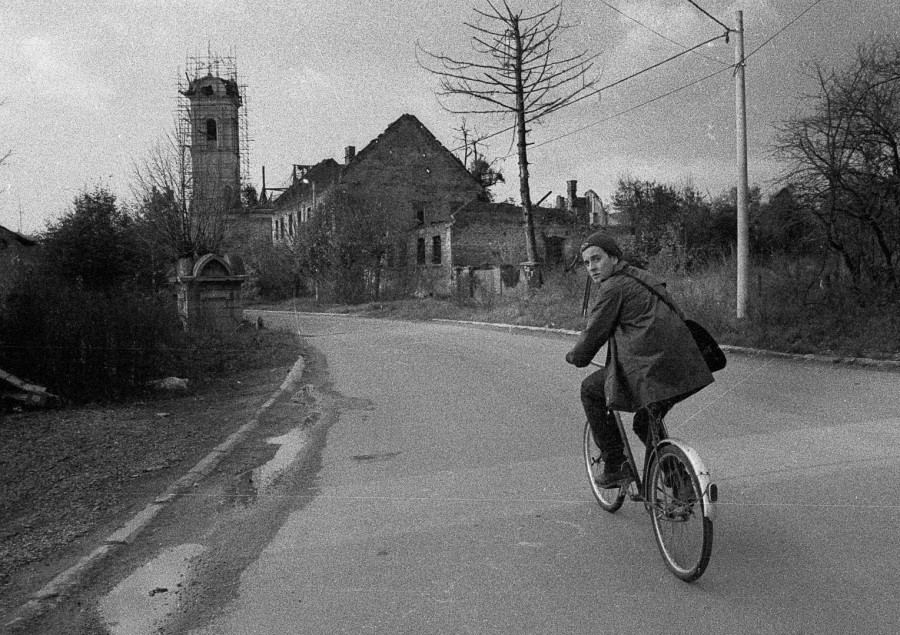 Pakrac Croatia, 1996. I spent 5 months here, working on a volunteer social reconstruction project in this destroyed and divided town.  Pakrac was 80-85% destroyed during the war and was in many ways, the middle of nowhere. In my time off I cycled around the ruins of the ethnically cleansed and destroyed homes. Sometimes quite stupidly (the area was littered with landmines) I ventured into abandoned buildings and homes.

Left behind were photographs, clothes, pictures on walls. As the homes were emptied most of the buildings were set on fire, so there wasn’t much to photograph but occasionally you would find the odd solitary shoe lying amongst the carnage and you only hoped that its owner had escaped and survived.

12 years later whilst out running I first discovered the Oatlands estate in Glasgow. Abandoned and partially boarded up, the flats had been emptied years before, but they remained littered with personal belongings such as letters, photographs, clothes and toys. It felt like people had fled in a hurry, unsure of where they were going, or their final destination.

Walking around what was left of the Oatlands I was taken back to my days in Pakrac. My wife freaked out claiming it could be dangerous, with security fences, rotten collapsed floorboards, and leaking gas meters – and sometimes it could be. But this time there were no landmines to worry about. 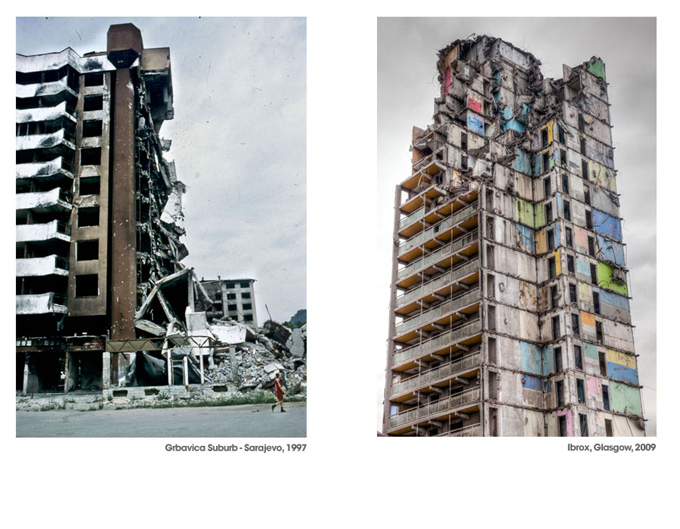 I moved back to Glasgow in late 2004 after 5 years in a sleepy Wiltshire town of thatched cottages, no crime, no litter and not even a sniff of dog s**t on the street, the polar opposite to the streets of Bridgeton. I remember driving past Ardenlea / Summerfield St in Dalmarnock on a cold misty winters evening at 4 in the afternoon and being transported back to the first time I drove into Sarajevo in 1996.

The Whitevale Flats have the most striking physical resemblance to the UNIS towers in Sarajevo. The UNIS towers were clear targets for the Serb artillery and a symbol of Sarajevo’s financial sector. Partially stripped back of their glass and facade the buildings resembled the brutalist concrete structure of the Whitevale flats, almost as if the latter are half constructed buildings, just awaiting their shinny coat of a glass and steel facade. (Maybe even putting cladding and glass on the Whitevale flats could be an option rather than wholesale demolition.) 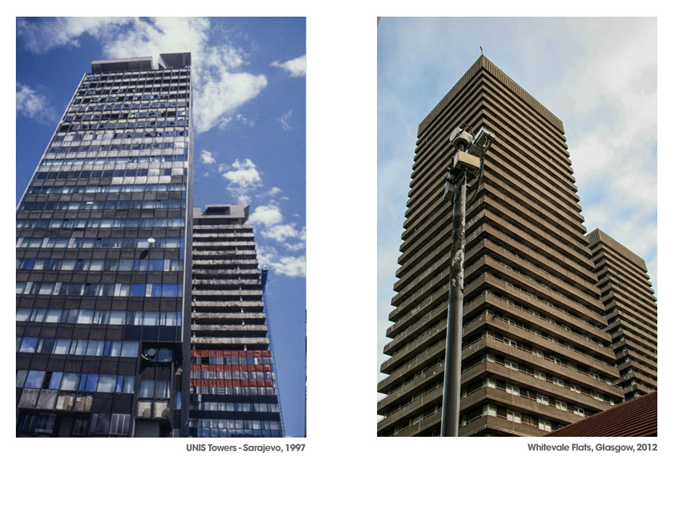 The regeneration of Glasgow and the destroyed landscapes left by the process are temporary, these structures that will only exist for a limited time. Just like in Bosnia, they will be rebuilt in time.

In Bosnia the hope is that war will not return to create more havoc and destruction. In Glasgow we can only hope that in 30 years time the new homes and communities we are building now do not suffer the same fate of ‘knock em down, build em up again’.