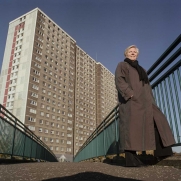 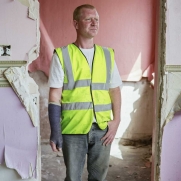 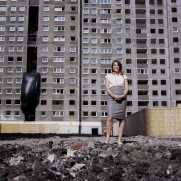 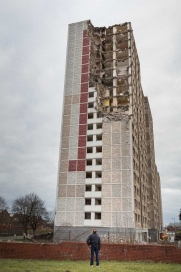 “They were only supposed to last 40 years anyway,” said Andy, demolition contractor and Sighthill resident, as we viewed Sighthill and the city from the rooftop of the Fountainwell Terrace block. “But it was a great place to grow up, as a child but now it’s a wee bit different.”

Fountainwell was one of three of the blocks that were being prepared for demolition. ‘Soft stripped’ they call it – the removal first of all furniture and contents left behind, then the windows, the kitchen sink, the bathtub and all fixtures and fittings. In effect all that remains is concrete and wallpaper, and then the button to blow them up can be pressed.

Like most people in the area Andy was glad to see the back of the flats. He explained to me that high-rise living was no longer ‘fashionable’ and that they had “served their time and purpose”. It was the standard rallying cry and explanation you hear across Glasgow when debating high-rise demolition.

Built in the late 1960s and originally made of ten high-rise slab blocks, the Sighthill estate was once home to over 7,500 people. By the mid-1980s it was labelled a ‘sink estate’ with high levels of unemployment, crime and drug abuse. Local press and the city council described Sighthill as a “byword for deprivation.”

When I began documenting in 2008 demolition was already underway – two blocks had already been demolished and the next three were due for demolition in 2009. I asked former residents what happened in Sighthill, what was the turning point that turned it from home for thousands to a sink estate?

Most blamed the collapse of industry in the area, the lack of facilities, and some just hated the grey monotonous landscape. Deborah, another former resident, offered her own explanation for the flats’ fall from grace – heroin. In the 1980s, when heroin arrived on Clydeside, it spread rapidly across Sighthill and the rest of Glasgow.

This was at a time when Margaret Thatcher’s Conservative government was tearing apart the city’s old industries, leaving thousands without jobs and without hope. Heroin was seen as a cheap and easy escape. “It became intolerable – we had people shooting up in the close, in the lifts, no-one was working and a lot of people were getting wasted. There used to be a morning rush commute in the flats – a rush to get the lift, to get to the car park and then to get to work, but that all stopped when no-one had jobs. I knew me and my son had to get out of there. High-rise living was no longer conducive to family living.”

Even after losing half of its homes and residents, the remaining Sighthill community ploughed on for years in a state of partly demolished limbo. Residents even campaigned successfully to have two of the highrise towers saved from demolition and were promised a planned refurbishment. But, in 2012, the allure of staging another mega sporting event sealed Sighthill’s fate, as Glasgow City Council was shortlisted for the 2018 Youth Olympics.

The demolition of all Sighthill’s remaining high-rise flats was back on the agenda. Then-Council leader Gordon Matheson, said: “Let’s not kid ourselves. This is an area that has been going downhill for many years.” Despite losing the bid to host the Youth Olympics the investment money of £250 million was put forward for a planned redevelopment of the complete area and the last two remaining blocks would be emptied and demolished in late 2016.